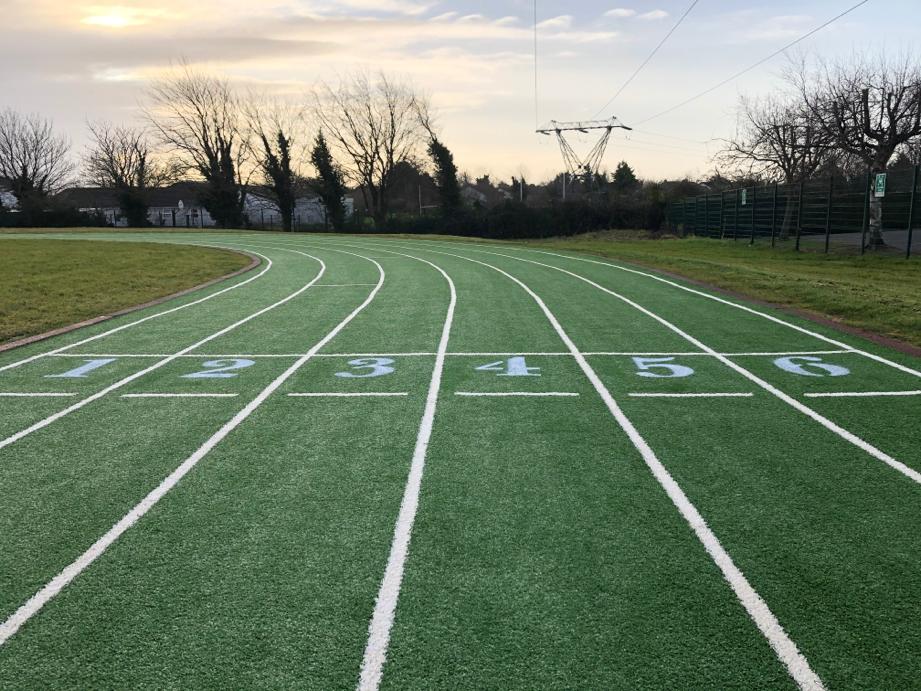 Pop Up Races are delighted to be announced as the official club sponsor of Clane AC, a partnership that will continue until at least 2023. This was announced at the recent opening of the clubs new 200m, floodlit track.

Co founder of Pop Up Races, and Clane AC member Brian Conroy is excited to be part of the growth of this young, ambitious club.

”The recent growth of Clane AC, through the hard work of John Finn and the dedicated committee and club members, means that our community can reap the benefits of this facility. It’s proximity to the 3 schools as well as other sports facilities means that the town can boast some of the finest facilities in the country, something everyone in Clane can be proud of.”

”We are delighted to be able to partner with Clane AC, to give back to grass roots Athletics, and to support a club with values that are so similar to our own core values at Pop Up Races.” 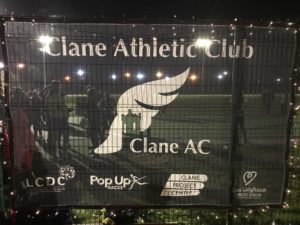 December 2019 marks a major milestone for Clane AC when the new athletic track is officially opened by Mr Hamish Adams, CEO of Athletics Ireland. The project was delivered by a passionate and dedicated team of club members over the past 2 years. This includes the clubs volunteer coaches and committee who share a keen ambition, a love for athletics and a desire to promote fitness, health and wellbeing in the community. With this new facility in Clane, the club has developed a legacy which will benefit the whole community of Clane for future generations.
Clane Athletic club was founded in the 1970’s and lay dormant over the 80’s & 90’s, until 2012 when a small group came together to revive the club. Since then, thanks to the tireless work of a dedicated group of volunteers, the club has gone from strength to strength developing strong juvenile and adult running groups. The club has seen a steady growth in membership numbers year on year.
The club has been based recently at Scoil Mhuire Community school in Clane who kindly allowed the club
access to their indoor and outdoor facilities. This allowed the club to train year-round in a safe environment.
The club realised there was a need to develop our own athletics facility.
he club embarked on an ambitious project to build new athletics track and a specific team
was set-up in 2017 which commenced by applying to the local and national funding bodies. Many hours
were spent developing business plan, selecting appropriate contractors and developing fund raising plans for
the project. In the Summer of 2018, Clane AC was successful in securing funding from the Kildare Leader Partnership fund and start-up funding was granted to build a 200m running and sprint track with an in-field events area for jumps & throws. The funding model required that the club fund fundraise for a portion of the costs and on completion of each construction phase would then be reimbursed by the funding body of the awarded amount. A range of fundraising activities were held including, race marshalling, bag packaging, church gate collections, jersey day in local schools and many others. The club was also fortunate to receive funding from several corporate sponsors and local companies. The project commenced in November 2018 when PST Sport, the main contractors, broke ground at the site. This current phase of the project was completed in June 2019 with the completion of the running track and the installation of floodlights. Further work is planned subject to the necessary funding to construct a long jump pit at the track, installation of a club meeting room and toilet facilities and to construct a walking track on the outer perimeter. The track is situated on the grounds of Scoil Mhuire secondary school in Clane in a strip of land which also adjoins the two national schools. The project to date has cost €240K which was part funded by the grant received from Kildare Leader. Additional fundraising activities are planned over the coming months to finance the loan repayments and to complete the planned works.
There is still a lot of work to be done, but this is nevertheless a major milestone. The running track is now
available for use and the club continues in our efforts to raise money to see the entire facility come to
completion.