I’ve been sitting on this blog for a few days now, not knowing how to start, what to write. I’m faced with a situation that is a very rare occurrence for me, not knowing how to put it into words. So I decided to stop with the rumination and just come out and say what’s on my mind, and here goes…… I GOT A NEW PB! I’m only delighted with myself. It came at the Irish Runner Paced Miles. These are held monthly, and for only E5, you get excellent coaching on how to warm up properly and how to run the paced mile. You then get a pacer running to your target time, anything from 5 minute milers to 12/13 minute milers – we’re all catered for and really well looked after. You also have the support of the other athletes who have either run their own mile or are waiting to do a faster one. It’s fantastic value for money and I love that I can get a really hard workout, running my heart out for a relatively short period. It’s a workout that I would find difficult to do on my own so I love to incorporate it as part of my overall training. My all-time PB was 9:15, set in August 2015. Since I was ill, my PB was 9:28, which I hit two months in a row. But this time, I ran the mile in 9:06 and am absolutely delighted – so much so that I’ve marked the occasion with a Bling Bandits medal – sure why not.

Now, while I’ve said that the Paced Miles are very good value at only E5, imagine what value you’ll get out of the summer series which takes place in the Phoenix Park and is completely FREE. All details are on the Irish Runner Facebook page. You just have to register in advance. Here’s the link:

Now, PBs can be a bit like buses – there’s none for ages, then two come along together. Yes it’s true – I GOT ANOTHER PB!! This one came at Mullingar parkrun. I knew that, since February, I’ve been getting fitter all the time, and it was their first birthday, so I brought my lovely running friends, Carla and Laura, to Mullingar parkrun to help them to celebrate. I had heard that Mullingar parkrun was a PB course, so I went there to get a PB, make no bones about it, but I wasn’t telling anyone that beforehand. My post-illness PB for 5k was a month ago, at Jog for a Dog, and I remember thinking at the time that I was so far from my 5k PB, that I may never get another one, not least because I’m not getting any younger. And over the past year or two, I’ve had to restart couch to 5k so many times due to injury or illness, that chasing a PB seemed futile. In the days before Mullingar, I was at times telling myself that at least I’d probably get a post illness PB, but I had harsh words with myself that if I start with that mindset, then a post-illness PB is what I would get. I had to tell myself that I was going to leave absolutely no doubt that I had given it everything, and that this would truly be my very, very best on the day. And I did it! I knocked over 40 seconds off my previous PB, which had stood since February 2015 – that’s a long time to be chasing a PB. I joked with the fantastic parkrun volunteers that I might have gotten a very long-awaited PB, but no pressure on the person uploading the results! We were almost back home when the results came in and I was thrilled to bits. I really can’t even properly express what this means to me. I began to feel a return to normality in February, and this PB is proof that I am again fit and healthy. And this was confirmed by my consultant this morning saying that my condition is now stabilised and I need only annual check-ups to ensure that we keep it that way. Happy days. 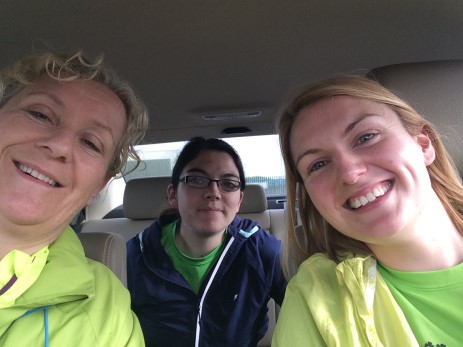 With Carla and Laura, off to Mullingar parkrun to chase a PB. A wonderful time was had by all and I’ll be back for the hospitality, the lovely scenic route and another PB!

By the way, when I arrived at Mullingar parkrun I realised that I didn’t have my barcode bracelet with me. Can you imagine??? Going all that way, getting a PB and not having your run registered?? Thankfully, I have an extra printed barcode in my car and my husband’s car, so that I always have a spare barcode at hand. Phew! #DFYB

So, you’d think that 2 absolute, out-and-out, PBs would be enough action for this month. But that’s not all. On Wednesday last, I also received my Kildare County Road Race Championship silver medal. I was honoured to be presented with this by the ultra-legend, fellow Le Cheile member and total gentleman, John O’Regan, who made a lovely fuss of me at our athletics club training. 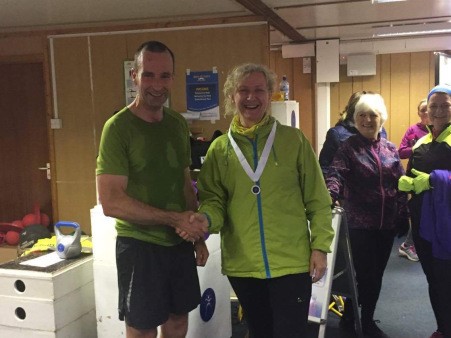 Receiving my Kildare County Championship 2017 Road Race Silver Medal.  John O’Regan took time out from his busy training and coaching session to make a lovely fuss of me.

But there’s more. I also received my medal and scroll from the Lord Mayor’s Challenge. We were invited by Dublin’s Lord Mayor, Brendan Carr, to a reception in City Hall. There, those of us who participated in the challenge received a scroll, while everyone who completed it fully received a gorgeous medal. I’ve written about the Lord Mayor’s Challenge before so for now, suffice to say that I love it. I love that I met so many friends and made new ones, that we worked so hard to earn these medals, and will cherish them always. It is such a privilege to be a part of this. 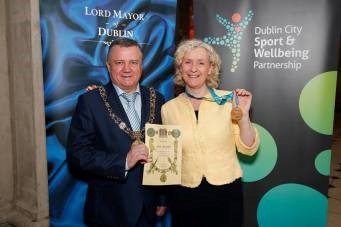 And just one other thing. I ran my first post-illness (there’s that flippin’ word again. I promise, I’ll soon stop using it) 10k. This was the longest distance without stopping since January 2016 and I ran it at the Longford Canal Run. I was disappointed with my time but, let’s face it, I can’t have everything!

So now I’m running all of the races that I had to cancel last year. So far, I’ve done Jog for a Dog, the Great Ireland Run (5k for me), and the Longford Royal Canal Run. Next comes the Patrick Pearse 5k, then the Terenure 5 Mile. I’ve also booked the Women’s Mini Marathon, the Clonee 10k and the Carton 6k Trail Run – so many races, so much fun! And, of course, I’ll be running our own Le Cheile 5k on 10th May. Last year I wasn’t well enough to even volunteer at this, so I’m delighted to be running it this year.  Here’s the link to register in advance, or register on the day. (Blatant advertising, I know, but there you go). 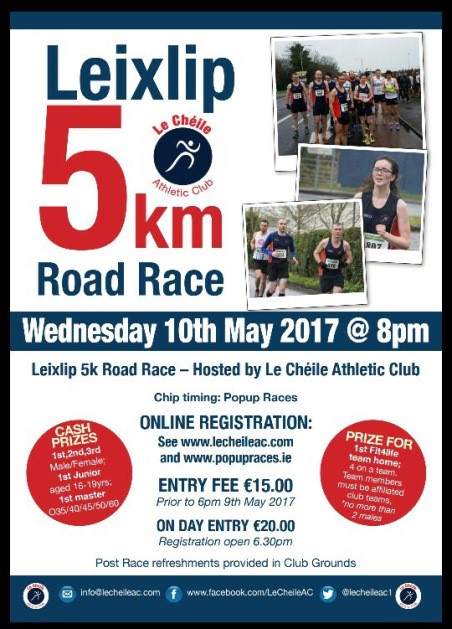 April has been a fantastic running month for me, and that’s thanks to all of the people, runners and volunteers, involved in each of these events. Thank you to everyone at the Lord Mayor’s Challenge, the Irish Runner Paced Miles, parkrun, Le Cheile and Longford Canal Run. You are all greatly contributing to making me the runner that I am.

And just to finish, a photo of the results of April’s treasure hunt. I love a bit of bling, and each and every one of these medals was hard-earned. Now to get myself some more….. 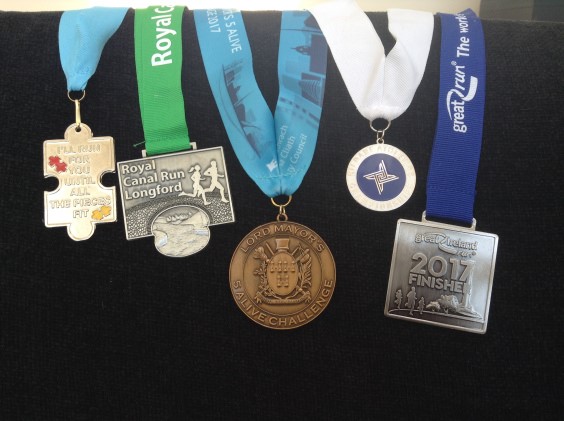