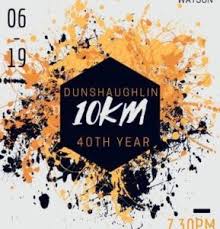 ….and now, finally, we draw breath and reflect on one of the great nights of Irish Road racing.

Where to start…Tanosa v Clohisey? The record breaking Fionnuala McCormack? The record entry? This race had it all and more.

The Dunshaughlin 10k has always had a reputation for being a fast race, and this years edition, the 40th running of the event, and round 5 of the Kia Race Series, had sold out at 1,000 weeks in advance. It could have sold out again twice over if needed. Conditions on the night were almost perfect, with a slight wind the only concern on an otherwise ideal night for racing. The town of Dunshaughlin in the heart of Meath came alive from 7:30pm, as crowds lined the streets to witness some of Irelands best battle it out over 10k. 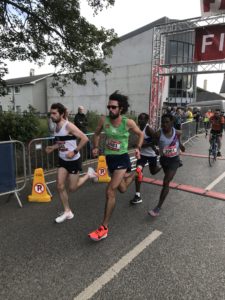 The pace was relentless from the gun, with Mick Clohisey (Raheny Shamrock), Hiko Tanosa (DSD), Eric Keogh (Donore Harriers) and Peter Somba (Dunboyne) streaking clear with a first mile of under 4:40. By halfway, the group had whittled down to 3, as Keogh dropped off the pace set by the leading 3. With live splits at the 5k point, we didn’t have to wait too long to see that Kilcoole AC’s Fionnuala McCormack had raced clear in the womens race, with Lizzie Lees course record of 33:13 well within her sights. 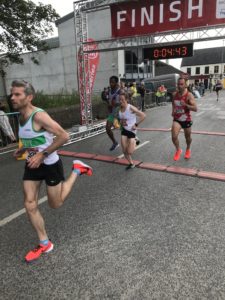 As the mens race continued, three soon became two, as Clohisey, who had taken the race on from the start, and Tanosa moved clear of Somba and raced for home. The expectant crowd at the finish roared on the Irishman as he came into view, but it was Tanosa who had that final kick in his legs to push clear and take the win in a trime of 29:30, a second clear of Clohisey. Peter Somba, Eric Keogh, Brian Maher (Kilkenny City Harriers) and Cillian O Leary (Raheny) rounded up the top 6.

Back on the course, McCormack was the class of the womens field, and in the end obliterated the course record, coming in in 32:18. Perhaps the race for second was the real race here, with Sinead O COnnor (Leevale), Mary Mulhare (Portlaoise) and Una Britton (Kilcoole) coming in 2nd, 3rd & 4th with less than 20 seconds between the 3. 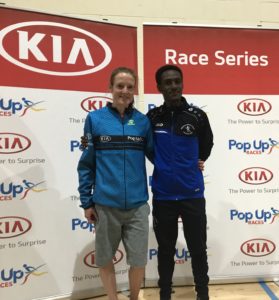 Overall, 940 runners crossed the finsih line on a great night for racing. The town of Dunshaughlin comes alive for the Dunshaughlin 10k, and this race is yet another example of a club race being organised to the very highest standard.

In the Kia Race Series “Race for the Stonic”, Eric Keogh of Danore continues to look like the one to beat. The female race is a lot closer, and with Fionnuala McCormack now on the board with a win, she could be the one to make a late charge and join the battle between Sinead O Cpnnor and Mary Mulhare for the use of a brand new car for 12 months.

Next stop for the series is the sold out Roscommon 10 Mile, where Clohisey, Tanosa will go head to head again.

But for now, To the organisers, the runners, the spectators and the people of Dunshaughlin, THANK YOU. This is what road racing is all about and year 41 of this iconic race cant come quick enough!

Full results, including teams and 5k splits can be found on www.popupraces.ie